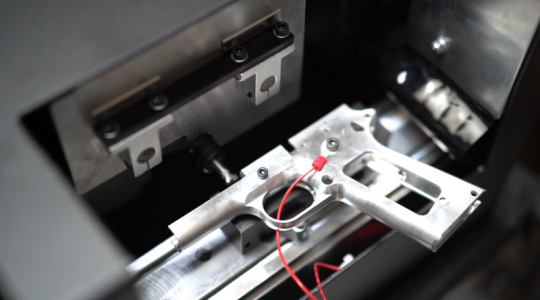 Refinements in hardware and software allow the tiny CNC mill to create pistols.

Three years ago, Cody Wilson and his organization, Defense Distributed, released a $1,200 computer-numerically-controlled (CNC) mill called the Ghost Gunner. The machine essentially made home gunsmithing faster, cheaper, and more portable than ever before, but it had a limited scope (no pun intended). Initially, the Ghost Gunner only aimed (OK, maybe some pun intended) to complete unfinished lower receivers for AR-15 semi-automatic rifles.

Today, that scope widens: Wilson and Defense Distributed are now in the handgun business, too.

“It’s a certain type of person who builds and enjoys an AR-15—that’s a lot of gun, and most people don’t feel the need to have a big ol’ battle rifle,” Wilson says. “But we believe lots of people are interested in the conversation about an untraceable, concealable handgun. It’s been on the roadmap the whole time for this project. It’s just always been a question of how we get there, and it ended up being very, very difficult—kinda like the brass ring of the project, if you will.”

“Just like the ARs and stuff, you’re making the identical item that you would otherwise handle, purchase, and fire—so it feels identical,” Wilson notes. “These are real guns.” If the ability to sit at home and make a genuine handgun (which this very much is) seems crazy, perhaps you’re not familiar with the work of Defense Distributed. Nearly two years before Wilson and co. released their AR products, he famously demonstrated the ability to 3D print a lower for an AR-15. Wilson has been a 3D-printed firearm pioneer for five-plus years now.

As you might expect, the initiative has generated some pushback. People ranging from Google CEO Eric Schmidt to various politicians have publicly voiced displeasure (or attempted to introduce legislation) regarding the idea of 3D-printed firearms. FedEx initially refused to ship Defense Distributed products.

The thought of an untraceable, DIY handgun in the era of so many single name tragedies (Aurora, Newtown, Orlando, Charleston, and so on) certainly raises many complex questions. There is no foolproof way to ensure a 3D-printed gun won’t be used to commit a crime in the same way there’s no foolproof plan to ensure the safe use of any firearm. But currently, creating a handgun at home remains entirely legal.

The Undetectable Firearms Act bans firearms that go unnoticed by a metal detector, so today’s 3D-printed firearms use metal to an extent (related: an attempt earlier this year to update the legislation appears to be stalled). And the United States Gun Control Act (GCA) of 1968 explicitly allows anyone to manufacture their own firearm without a license. Manufacturing such weaponry for sale or transfer does require a federal license, but manufacturers can comply by making a product that isn’t technically a gun but, rather, skirts the line as possible. For instance, the early Ghost Gunner CNC mill required buyers to provide their own semi-finished lower. (Nowadays, Wilson and Defense Distributed stand as a federally licensed gun manufacturer and dealer and offer their own lowers.)

Wilson says given how Defense Distributed’s new handgun offerings are essentially just different models of products it previously sold, he doesn’t expect any new legal challenges to arise. So for now, any lingering legal headaches for the company instead remain tied to its ongoing First Amendment lawsuit with the State Department regarding whether CAD files for 3D printing a gun can be distributed online.

“Of course there are so many agencies that follow what we do at this point, it’s possible,” Wilson says. “But our legal team is on standby, and we’re doing this like we did before. There’s nothing groundbreaking from a legal point of view. Now, there are certainly more authorities that might be upset, but we’ll see what the reaction is.”