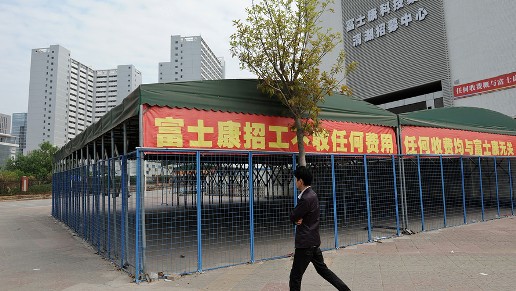 The U.S. has a laundry list of complaints in its trade war with China, from a sizable trade deficit to restricted market access and complaints that the Asia giant does not import enough American goods. But perhaps the biggest thorn in the U.S.’s side has been forced technology transfers and intellectual property, or IP, theft — allegations that Beijing says are overblown.

Regardless, China’s State Council, the country’s cabinet, on Sunday announced it would crack down on IP theft, largely seen as a gesture to nudge trade talks toward a positive direction.

Here are five things to know about the role IP theft has played in the countries’ fractious trade relationship:

IP theft has been rampant for ages: The U.S. says China has been stealing intellectual property for years. A 2017 report by the National Bureau of Asian Research estimated “that the annual cost to the U.S. economy continues to exceed $225 billion in counterfeit goods, pirated software, and theft of trade secrets and could be as high as $600 billion.”

The AmChamChina-Deloitte 2019 China Business Climate Survey Report asked firms, “What barriers, if any, are preventing you from increasing innovation in China?” The leading response? “Lack of sufficient Intellectual Property protection.”

How does China allegedly steal intellectual property from foreign companies? According to alleged victims of IP theft, the methods vary. They can range from trading with, working alongside, or forming a joint venture with an overseas entity, and the Chinese side gaining access to sensitive or proprietary information. In the past, businesses often willingly gave access to a Chinese partner in order to gain access to China’s vast market — known as forced technology transfers.

China has promised to gradually reduce these requirements, and has done so, for instance, by allowing majority ownership in joint ventures in several sectors — giving greater decision-making control to the overseas entity — and allowing increased market access without the prerequisite of technology handovers.

But the recent circular on IP theft seems to target more covert and illicit access to proprietary technology or information.

The new rules are vague: The main announcement Sunday was thin on details. But it did mention a two-pronged approach: raising the penalties for violators and lowering the threshold for what is considered an IP violation.

“Strengthening IPR protections is the top priority in improving the system for the protection of property rights,” the document stated.

It did not say what punishments would be meted out to offenders, or to what extent the threshold for an action to be considered “theft” would be lowered.

When, and at what level, will this tighter enforcement take place? Here, again, the details are hazy. China said there should be a significant reduction in IP theft by 2022. By 2025 “social satisfaction with IPR protection in China will reach and maintain a high level.”

Interestingly, the announcement put a large degree of the onus on local governments, saying they will be responsible for implementing the stricter intellectual-property-protection rules.

How much will this concession help the trade war? That’s unclear, for several reasons.

For one, the rollback of tariffs has been an initial demand from the Chinese side, so movement in IP issues may be futile if the trade levies cannot be reduced or eliminated. In fact, tariffs on both sides have risen so high that they have largely overshadowed trade-theft concerns.

Furthermore, President Trump — who has large voting constituencies in the farm belt — has also stressed the need for China to purchase far larger amounts of agricultural goods.

In short, expect IP issues to remain on the table — but alongside a wider set of concerns from the American side.

Tanner Brown is a contributor to MarketWatch and Barron’s and producer of the Caixin-Sinica Business Brief podcast.