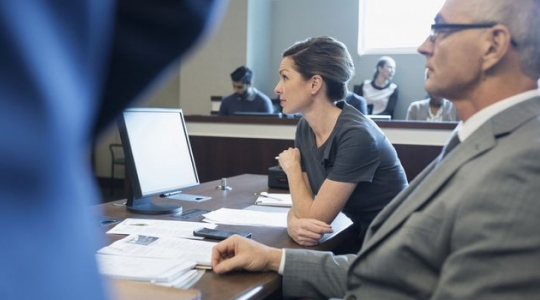 Litigation Usually Isn’t the Solution But Sometimes It Totally Is

Win or lose, your attorney is costing you hundreds of dollars an hour.

Litigation is often the first impulse when someone takes an action against your business interests, but it isn’t always the right approach.

When a business partner, client, supplier or purchaser does something that you believe is a violation of your contract with that company or individual, or that creates a significant challenge for your business in some way, it’s natural to want to put a stop to it in a decisive manner. Filing a lawsuit seems to be the “civilized” way to do that in today’s society.

But more often than not, both parties walk away from the courtroom disappointed and frustrated with only empty bank accounts to show for it. While a lawsuit might seem the way to resolve a business dispute, the conclusion is seldom as satisfying as filing the suit in the first place. In fact, there’s almost always a better way to resolve disagreements between the parties, even when the other party is clearly in the wrong. Here are a few reasons why you might want to avoid litigation as a means of resolving business disputes.

Civil litigation of any kind is costly. A 2010 survey of Fortune 200 companies with lawsuits that cost over $250,000 found that litigation costs for major business cases rose 78 percent between 2000 and 2008, measured as a percentage of company revenue.

The same is true for small businesses, too. Attorneys with experience in business litigation bill at hourly rates up to $1,000 or more for large firm partners located in big cities.

And attorney fees are just one cost of a case. There are also often exorbitant fees to retain experts, such as forensic accountants, necessary to prove your case. You’ll probably have to obtain depositions of various individuals related to your case. And you’ll have to pay these costs before you recoup a dime of the losses that you’re seeking to recover in your case.

Litigation is emotionally and mentally taxing for any party to it. You can’t just turn it over to your lawyer. Rather, you’ll have to help build your case.

Preparing for trial usually lasts for months and requires the active participation of key officers and employees in a business dispute between two companies. You’ll lose not only your own time but also that of important employees. This means those resources aren’t available for the other important aspects of your life.

Sadly, it’s usually family and other personal relationships that take the hit, which can cause an entirely new set of anxieties and problems.

Litigation often airs everyone’s dirty laundry. That’s because before the actual trial, parties engage in a long, drawn-out process called “discovery.” In discovery, both parties get to dig into each other’s history and affairs with a fairly broad set of parameters outlining the areas that can be inquired into.

Discovery is believed by many legal experts to be a top reason why the NFL and Colin Kaepernick settled their high profile collusion case earlier than expected.

Most documents filed with the court become a part of a public record. Through freedom of information laws, anyone can request and obtain copies of those documents, unless the court has deemed them so sensitive that they should remain under seal. However, that protection is the exception, not the rule.

It never guarantees a favorable outcome.

Litigation often “tells” a different story than the one you’re familiar with. For example, most people are familiar with the McDonald’s hot coffee suit, where a woman drove away from the restaurant with an open cup of coffee between her legs and was burned when the cup inevitably spilled. She ultimately won millions of dollars.

Except that’s not at all what happened in the case. The woman was a passenger; the car was parked; she suffered second- and third-degree burns that required multiple skin graft surgeries; and the company had already settled more than 700 scalding claims related to their coffee, which they served as much as 30 degrees Fahrenheit hotter than other restaurants. Moreover, the plaintiff (the injured woman) only sued because the restaurant refused to pay her medical bills of $99,000, which was her only request. The jury awarded her $2.7 million in punitive damages.

The moral of this story is that what most people remember is not necessarily what actually happened. That can work for or against you, but it’s largely out of your control along with the very real possibility that you’ll go through all this only to lose the case.

With all that being said, there is one important exception and that’s in circumstances where you must  litigate to protect your interests. A major example is IP litigation, where if you don’t sue to protect your rights you may lose them altogether.

In other cases, however, it pays to investigate other methods of resolving your business disagreements. Ask your attorney about informal mediation or arbitration as a way of avoiding the high cost of litigation.