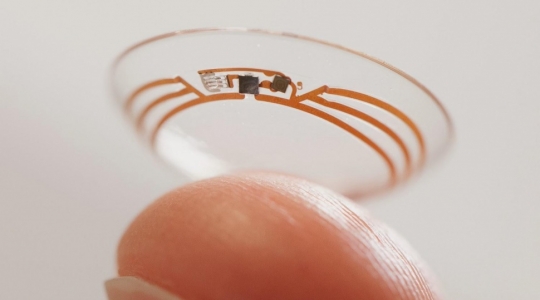 While it’s only a patent application at this stage, Google’s idea of a contact lens with a tiny camera embedded will no doubt have a bead of sweat forming on the brow of many a privacy campaigner as they contemplate a world where secret snappers and discreet filmmakers roam the streets unhindered.As you would expect, the Mountain View company sees the gadget as a force for good; technology that could one day prove beneficial to many members of society.

Google’s application, filed last month with the U.S. Patent and Trademark Office, explains that its futuristic device could, for example, flag hazardous objects in the path of a wearer and even extend his peripheral vision.

The application, spotted by the Patent Bolt site, also explains how the special lens – made up of a control circuit, a camera, and an image sensor – could assist a blind person approaching an intersection. Processing visual information from the immediate surroundings, the contact lens could communicate with the user via audible signals delivered through a smartphone, indicating if and when it’s safe to cross the street.

The eyeball-based gadget could also warn the visually impaired of obstacles along the sidewalk, and could incorporate facial recognition technology too, a feature that it suggests might also be useful for law enforcement officers checking to see if potential suspects are already on their records.

Will the folks at Google X start attaching prototypes to their peepers?

With Glass, Google has been trying to reassure privacy campaigners that it won’t be offering facial recognition features, so it’s by no means certain that such functionality – which could also include taking photos with the blink of an eye – would become part of its lens.The lens’s technology could ultimately be worked into Google’s smart contact lens that we heard about at the start of the year. THAT smart lens concept, which would obtain power from a static electricity charge, incorporates a tiny glucose sensor capable of providing the user with constant data on blood sugar levels – ideal for those with diabetes.

At the present time, Google isn’t thought to have any release plans for any of this smart lens stuff, but the company has carried out a number of clinical research studies to gain a better understanding of its potential.

As for its camera-equipped offering, at this stage it exists simply as a patent application, though knowing Google’s penchant for exploring new ideas, it probably won’t be too long before the folks at the Google X research unit start pulling up their eyelids to attach prototypes to their peepers.