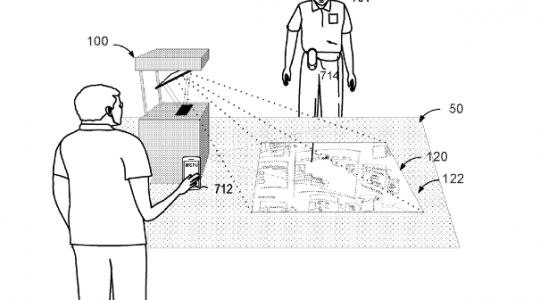 Microsoft patents another try at a cheaper Surface table

Microsoft’s Surface table (now PixelSense) was always a great technology held back by the massive cost of having such  a huge high-resolution multi-touch screen.

Now Microsoft has applied for a new patent “INTERACTIVE INTEGRATED DISPLAY AND PROCESSING DEVICE” which should make the technology cheaper and more realistic for mass adoption.

The patent describes an integrated PC and projector with sensors (such as a camera or IR depth sensors)  which could be placed on a surface such as a large table and then turn that table into a large-screened computing device.

Like many patents the idea is not very novel, but as described appears very practicable with currently available technology such as Kinect sensors and would of course be a lot cheaper than the $12,000 Surface Hub, while also not taking up much space when not in use, and being resistant to damage and dirt.

The patent was applied for in May 2015, and included staff from Microsoft’s Education workshop and marketing departments, presumably reflects some of Microsoft’s recent thinking and suggests we may see something like this marketed at schools in the future.