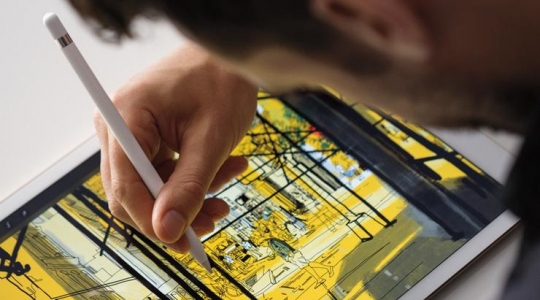 The patent describes a “Stylus with inertial sensor,” which would allow the Apple Pencil to work on its trackpad.

The Apple Pencil is currently only available to iPad Pro customers, but a new patent filing suggests that could change.

As 9to5Mac reports, the patent describes a “Stylus with inertial sensor,” which would allow the Apple Pencil$99.00 at Apple Store to be used on the company’s trackpad. The feature could be an ideal option for designers who rely upon a stylus and the Apple trackpad to sketch in popular design applications, like Adobe’s Illustrator$19.99 at Amazon.

Macs are often used by designers to create everything from ads to artwork. And Apple has encouraged its iPad Pro customers to do the same with its tablet. But so far, at least, Mac users have been forced to use tethered digital pads that can detect an accompanying stylus’s input and show the digital recreation of the drawing on-screen.

Apple’s patent suggests the company wants to play a role in that market with help from its Magic Trackpad$123.99 at Amazon. With the Apple Pencil in hand, the trackpad would act like a design pad, allowing designers to trace their creations and convert them into digital representations of their vision.

While much of the patent talks about what the Apple Pencil does with the iPad Pro$799.00 at Apple Store—communicate with a touch-screen device—the images accompanying the patent also show it working with other devices, like a joystick or a mouse.

But like anything Apple patents, it’s unknown whether the technology will ever make it to store shelves.