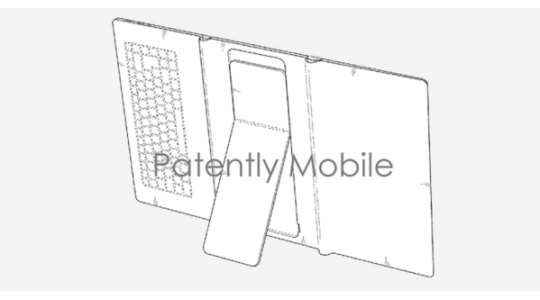 Samsung had released a ton of devices over the years, this company is well-known for a wide range of products, from smartphones, tablets and smartwatches to TV sets, refrigerators, etc. That being said, Samsung is considered to be one of the more innovative companies out there, they tend to experiment with new designs and form factors, their first Galaxy Note handset was the first true phablet out there, and even though people were skeptical about it, we all know how popular Galaxy Note devices are these days. The Galaxy S6 Edge also pioneered a new design in the smartphone world, etc.

That being said, it seems like the company is planning to release a foldable tablet at some point, as they have patented a foldable tablet with a built-in keyboard and stand. The company has been awarded a design patent for such a tablet, and if you take a look at the provided image, you’ll get the idea of what we’re talking about here. This tablet has three foldable segments, and once you fully open it, you get a huge display up front, the kickstand is placed in the middle segment, while the keyboard is placed on the right side, as you can see. Now, considering this is just a patent, we have no idea what specs are planned for it, nor when it might hit the market. As most of you know, patents don’t always make it to the market, so who knows if this device will ever see the light of day, we do hope it will though.

Now, as some of you might know, Samsung had introduced the Galaxy View tablet a while back, a tablet which sports an 18.4-inch display, so it’s huge. That tablet didn’t exactly sell all that well for the company, and we believe that its sheer size is to blame, and the fact that tablets aren’t exactly in high demand these days. Well, a foldable tablet which can become huge when needed, could be a compelling offering to some people, especially if it packs in a keyboard and a kickstand. In any case, we’ll report back as soon as we get more info about this tablet, stay tuned.