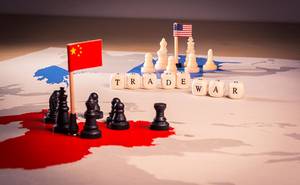 China says it will sue the US over tariffs through WTO

A spokesperson for the Chinese Commerce Ministry says China will sue Opens a New Window. the US through the WTO dispute settlement mechanism over the latest round of tariffs.

China responded by charging taxes of 10 percent and 5 percent on a list of American goods.

“On September 1, the first batch of U.S. tariffs on China’s 300 billion US dollars exported to the United States was officially implemented. I will file a lawsuit under the WTO dispute settlement mechanism. The US taxation measures are seriously contrary to the consensus of the heads of state of the two countries in Osaka. China is strongly dissatisfied and resolutely opposed. In accordance with relevant WTO rules, China will firmly safeguard its legitimate rights and interests and resolutely defend the multilateral trading system and the international trade order.”

The two governments say they are going ahead with talks this month in Washington but neither side has given any sign it might offer concessions.

The U.S. is pressing China to narrow its trade surplus and roll back plans for government-led creation of global competitors in robotics and other industries. Its trading partners say those violate its free-trade obligations and are based on stealing or pressuring companies to hand over technology.

The two governments have imposed higher taxes on about two-thirds of the goods they import from each other.

“We’ll see what happens,” President Donald Trump told reporters. “But we can’t allow China to rip us off anymore as a country.”