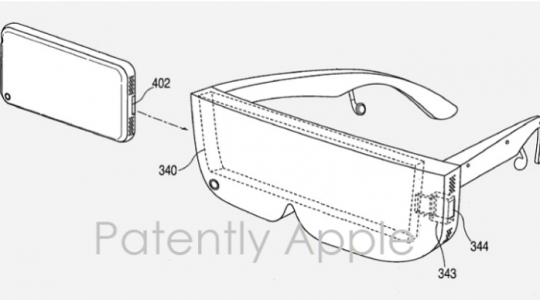 Last Thursday Patently Apple posted a report titled “Apple refines their Head-Mounted Display Device for a Second Time this Year.” Then late on Monday Patently Apple posted a report titled “Apple Reportedly working on Digital Glasses Supporting Telephony and Augmented Reality.” Today, Apple filed for two trademarks. One was filed in Europe for the icon representing the Apple Watch app “Breathe.” The second trademark filing was made in Hong Kong for the icon representing Apple’s open source framework for “CareKit.”

What threw me while I was rummaging through Apple’s filing for CareKit was what was listed in their international class 9 which covers hardware. Yes it made sense that the filing would cover Apple watch (smart watch) and the iPhone (smart phone), but I wasn’t expecting to see smart glasses.

Of course Apple at times lists the craziest things in trademark filings like “whistle alarms; animated cartoons; egg-candlers; dog whistles; decorative magnets and electrified fences.” In fact those I just listed appear in the filing below. So what’s the big deal in adding “smart glasses? Well, it’s the fact that it went overboard listing that device nine times. And just so that there was no misunderstanding, Apple legal went out of their way to list the following in addition: “smart glasses; 3D spectacles; eyeglasses; sunglasses; spectacle lenses; optical glass; optical goods; optical apparatus and instruments.” You can’t get any clearer than that. Apple legal is making sure there’s no misinterpretation of what they mean by smart glasses. No, not the kind you drink out of or covers the iPhone, it’s about spectacle lenses, 3D spectacles, eyeglasses and so forth.

I went back to review older trademark filings for Apple Watch icons to see if I simply missed it before. I checked out other Apple Watch oriented trademark filings for icons made in 2016 for Apple Wallet (July); ResearchKit (June) and Activity App (June) and none listed smart glasses in class 9. Then last month Apple filed a trademark for their Activity Tracker Sharing icon and indeed this was the first application that listed smart glasses. In that particular filing, Apple listed it eleven times under class 9.

Apple legal doesn’t throw darts at the wall and list new devices in a filing for the fun of it. Apple executives and Apple legal look down the road knowing that they have to begin covering a new category for future protection at some point in time. The silly ones like dog whistles are just canned verbiage that sometimes they use to hopefully hide something new so that it doesn’t stand out.

While the listing of smart glasses and all that it relates to doesn’t give us a time frame that we can expect to see ‘smart glasses,’ it does in fact tell us that Apple legal decided to turn on the switch and begin listing it at just the same time that Bloomberg is reporting that Apple’s smart glasses project is at the prototype stage isn’t coincidental.

It may come to market by 2020 as our report on the matter suggested or they could kill the project if it doesn’t deliver what they’re hoping it will deliver in that time frame. While in and of itself the revelation isn’t a smoking gun, it does provide us with yet another piece of the puzzle. It may very well suggest that ‘smart glasses’ are now on Apple’s radar of future devices because serious work is well underway.