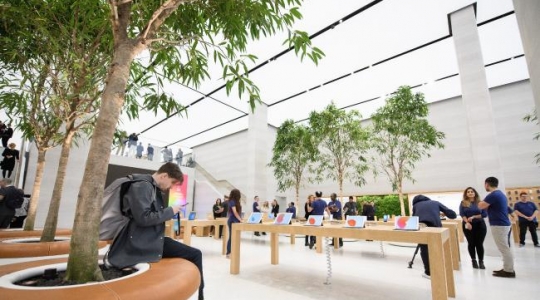 Apple patents its new big design: an oversized pot plant that has no hidden technology

FORGET about smart devices, Apple’s latest patented product is as dumb, or at least non-smart, as they come.

It’s a pot, or technically according to the US Patent that was granted this week, it’s a planter.

Basically, it’s an oversized container for filling with dirt and shoving a plant inside. And it took 17 of Apple’s designers to create it.

When Apple set out to revamp its flagship San Francisco store in Union Square, the brief was to include some small trees both inside and outside the store.

And rather than buying some plants down at Bunnings, or given the United States location at Home Depot, a team of 17 Apple designers in London, San Francisco and Cupterino got together and designed an oversized pot with the materials and curves of the planter inspired by Apple’s range of products.

One of the designers of the planter is Richard Howarth, Apple’s vice president of industrial design who has been with Apple in 1996 and, according to his bio at Apple, has been involved in the design of “nearly every Apple product since the iMac”.

Apple applied to patent the design in February last year and on Monday Patent number D769,148 was approved.

The planter that is patented in its design is now in other flagship Apple stores including Regent St, London.

You are here Home 2016 October Apple patents its new big design: an oversized pot plant that has no hidden technology