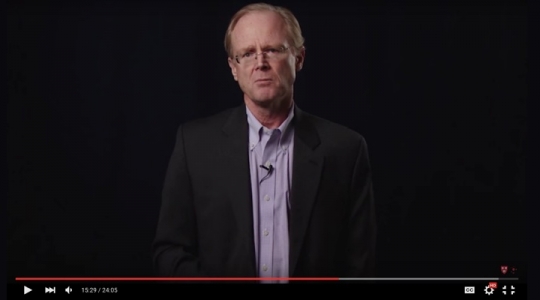 After tearing down a Harvard Law lecture on music copyright on copyright grounds, Sony Music has now relented.

The takedown happened on YouTube last week, based on the presence of several clips of “Little Wing” to illustrate points on compulsory music licensing.  The takedown was believed to be automatically removed through YouTube’s ContentID identification system, and reinforced criticisms of an overly-blunt enforcement instrument.

As of this morning, the 24 minute lecture has now been restored, with a Digital Music News commenter tipping the news.  The reinstatement by Sony offers a solid win for proponents of the fair use doctrine, which carves out specific, non-infringing use cases of copyrighted material.

In this case, the presence of a number of recording clips of “Little Wing,” originally written and performed by Jimi Hendrix, was deemed non-infringing for the purposes of education.  Specifically, Harvard Law professor William Fisher (pictured above) was using the sequence of clips to illustrate how compulsory licenses enable any performer to cover a composition in the US, subject to certain compensation and rules.

The reinstatement effectively nullifies the chance of any challenge by Harvard, with Fisher undoubtedly considering the juicy, high-profile copyright challenge.  That could have produced an unwanted and more concrete ruling on fair use, an exception that remains vague in US courts.  Stronger guidance, especially if it clearly defined and broadened usage rules, is unwelcomed by major content owners like Sony.