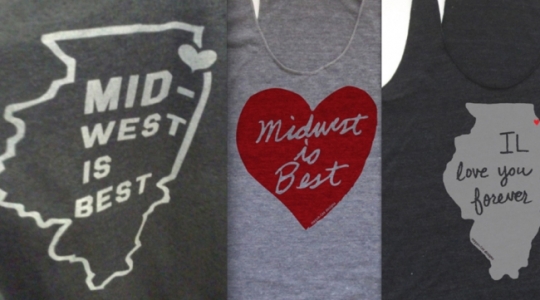 A Chicago-area T-shirt designer thinks that retail giant Target ripped off some of her best-selling designs — and she is fuming.

Megan Owdom-Weitz, owner of Berwyn-based Megan Lee Designs, said a friend pointed out two weeks ago that a tank top in Target’s “Local Pride” line featuring the words “Midwest is Best” is similar to designs she has copyrighted.

“It’s as if you were looking at my website and just combined two of my best-selling designs into one design and put it on a tank top,” Owdom-Weitz said.

Owdom-Weitz complained to Target, citing copyright infringement, which responded with a note explaining that the company vetted the design and will continue to sell the shirt.

A Target spokeswoman told the Sun-Times: “We have a deep respect for the design rights of others, and we firmly believe in the importance of original design. We’ve looked into the issue and talked with our designer, Todd Snyder. After thorough vetting, we’ve decided to continue offering this item. We apologize for any disappointment.”

Owdom-Weitz considered litigation, but after realizing she didn’t have the money to out-lawyer Target, she reached out to Chris Wrenn, a T-shirt maker in Boston who dealt with the same issue a few months ago.

In an attempt to call out and shame the big-box store, Wrenn, owner of Sully’s Brand, bought a full-page newspaper ad this summer in the Boston Herald. It triggered widespread local media coverage — and a reversal from Target. After debuting in Boston, Target’s “Local Pride” line recently hit Chicago.

“I told Megan she needs to get the word out,” said Wrenn, who, citing financial limitations, chose the publicity route over litigation. “We took them to task and they said it was an oversight and agreed to discontinue the shirt that ripped off our trademarked ‘Green Monstah’ design.”

“Target has significantly more lawyers than we do, but they bend very quickly when it comes to the public’s response,” Wrenn said.

“Megan’s case shows this is a pattern,” Wrenn said. “And I fear for the designer that’s going to wake up in San Francisco in several months with text messages from friends saying the best selling T-shirt at Target has your design but your name is not on it.”

“We’re basically just trying to get the word out about it,” said Owdom-Weitz, who quit her job with a Bucktown-based design firm in 2009 to foster the clothing business full time with her husband. They have a 15-month-old son and live in Berwyn.

A representative for Todd Snyder did not return a request for comment. But in an interview with TimeOut Chicago, Snyder said: “I put a lot of emphasis on speaking with locals in addition to Chicago small-business owners, like Don at Superdawg Drive-in, about what they loved about the city, which ultimately became my favorite part of the entire design process. This allowed me to discover so many hidden gems in Chicago — whether it be a local bar, restaurant or food — that provided inspiration for my designs.”

Owdom-Weitz still appreciates Target, but she wants the company to use local designers.

“It’s just a weird situation because I’ve always loved Target, but we and many of our supporters are no longer shopping there,” she said.