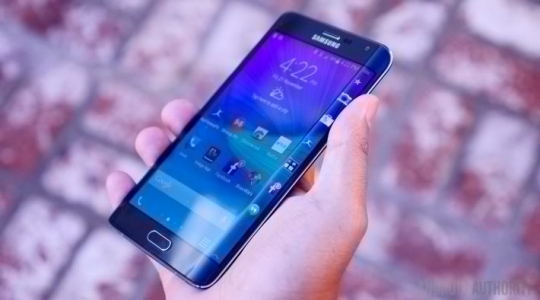 For the past few weeks, everyone has been fixated on Samsung’s new noteworthy nuance: the Edge Display. More specifically, the tech community has been hyped up about the rumors that Samsung will release an edge variant of its Galaxy S6, which is rumored to be called the Galaxy S Edge. Unlike the Note Edge, which released last year however, this precious product is said to ship with *two* curved sides. While LG has already gone on record and shown the world what it can do, Samsung remained silent. Until now.

Patently Mobile has obtained a series of design patents Samsung filed with the USPTO. Before you take a look, please note that Patently Mobile has asked that sites reporting on this story use just one of their acquired patent leaks and thus to respect their wishes, we can only offer you a single one. Of course you can see the whole set at their website.

What’s weirder? The dual edged display that folds onto the back, or the strange yellow pop-up part inside the recessed top?

Other than the much rumored couple of curves, the device sports an even stranger oddity: a mystery pop-up panel whose function is all but a mystery. We can only begin this is speculate what this panel could be, although in looking at the design blueprint itself, it’s unlikely to be a screen given that the glass elements are covered with diagonal lines.

It’s possible this could actually be where the device’s battery goes, although the patent doesn’t indicate there is any kind of panel that would cover the top portion. Still, given the fact that the panel looks to take up the entire width of the inside (though we don’t know how long it actually is), the battery would make a likely candidate. Alternatively, this could be a camera module, however there doesn’t seem to be any lines on the panel that would denote such. It may even be some kind of mirror or who knows what else. Unfortunately, as Patently Mobile reminds, design patents show only the shape and form, but say nothing of the parts and components inside.

Other than the much rumored couple of curves, the device sports an even stranger oddity: a mystery pop-up panel whose function is all but a mystery

Of equal curiosity is the fact that the design clearly shows that the edge display extends to the back of the phone, something that is quite intuitive when you think about it. The Galaxy Note Edge may have had a curved side, but if the device was face down, it wouldn’t be accessible. By extending the wrap-around to the back, Samsung is ensuring that the panels purported purpose (checking notifications) will be retained regardless of how the device is placed down on a surface, or for that matter, regardless of which way it’s pulled out of one’s pocket.

Finally, the patent design for the front of the device is devoid of any kind of home button, something that is a staple for Samsung products. Could this indicate the company is finally going to forgo it in favor of on-screen buttons like so many of its rivals have? If so, will this be a new design cue that is followed for all products in 2015 and onward, or could it be just for this one particular device?

LG clearly has one already, but do these patents offer any indication as to how far along Samsung’s provocative panel might be?

Suffice to say that this is most certainly confirmation that Samsung is working on a double Edged device, but it says very little in terms of substantiating the rumored Galaxy S Edge. Patents are often sought out significantly earlier than they are used (if they are used period), and thus it’s possible this won’t make it to a product until later in this year. Or next year. Or never. The question must be raised as to why this patent is only just now being approved and yet the “ring” smartwatch filing was leaked over two months ago. Could Samsung have been building this product while the patent was pending, or could it genuinely be for a far-into-the future feature? We won’t know anything for sure until Mobile World Congress hits in just over a month.