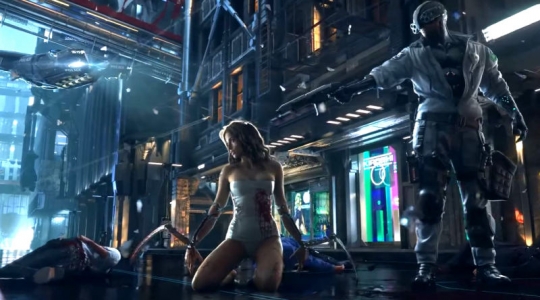 Video game fans have been anticipating the latest franchise from CD Projekt Red, Cyberpunk 2077, for years. But only recently did it come to light that the makers of The Witcher franchise had trademarked the term “Cyberpunk” and this week some fans cried foul. Now, the developer is insisting that everything is ok and they’ll never use their power for evil.

As Gamespot points out, some members of the internet commentariat fear that CD Projekt Red might become some sort of variation of the evil corporations that often serve as the antagonist in cyberpunk fiction. Afterall, cyberpunk is a genre of science fiction that goes back decades with hundreds of works falling under its umbrella. Trademarking cyberpunk is like claiming ownership of “romantic comedy.” Would smaller creators be crushed by the well-funded company’s lawyers the minute they dip their toe into the genre? What’s more, Cyberpunk 2077 isn’t even an entirely original property, it’s based on a pen-and-paper game from 1990 called Cyberpunk 2020.

CD Projekt Red caught word of the fans’ worries and released an official statement on Twitter. “We want to protect our hard work and we don’t plan on using the trademark offensively—it’s a self-defence measure only,” the statement reads. It goes on to explain that the trademark is primarily a case of protecting its own use of the name. For instance, if it wanted to make a sequel called Cyberpunk 2078 it would need the legal authority to prevent someone from snatching up that name first. It also claims that some of the trademarks were actually acquired from R. Talsorian Games, the publisher of the original game that Cyberpunk 2077 is based on. So, someone already owned the name anyway and it was never a problem.

The company went on to clarify that the trademark would only be enforced in situations that might cause confusion among consumers. “If someone names their game: ‘John Smith: Adventures Set in a Cyberpunk Dystopian Society’ or ‘20 Short Video Games Set in Cyberpunk Worlds,’ none of them should be treated as an infringement of our rights,” the company writes.

It’s a little bit ironic that the name of a genre that’s so focused on the free flow of information, rejection of ownership and never trusting corporations is now a legally protected trademark of a corporation that insists, “trust us.” But CD Projekt Red has built up a lot of goodwill in the video game world and most likely nothing egregious will ever come out of this.

Trademark trolling isn’t as high profile as patent trolling and doesn’t usually become a huge problem. In 2001, the makers of the B2 stealth bomber, Northrop Grumman, paid 10 bucks to settle a suit with the owner of the trademark for the term “stealth.” On the other hand, Sky TV has successfully bullied Microsoft to change the name of its cloud storage service SkyDrive. Sky TV also spent three years battling the makers of the open world video game No Man’s Sky. The game makers eventually settled for an undisclosed sum.