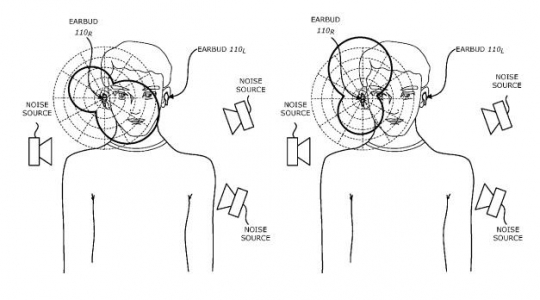 The company is looking into bone conduction technology that would improve voice communications in a wireless earphone system.

Apple has applied for a patent on bone conduction technology for voice communications, the US Patent and Trademark Office revealed Thursday.

Apple’s patent application, filed in February 2014 but not published till Thursday, describes a method of improving voice quality in a wireless headset with untethered earbuds of a mobile device. It describes a system in which voice input is accepted by one of two earbuds and, based on perceived quality, is passed along to a mobile device. An inertial sensor monitoring vibrations in a user’s bone structure and a range of other sensors help inform which signal to use, as described by Apple Insider.

Bone conduction transmits sound through subtle vibrations, rather than via speakers, often with an increase in clarity.

The patent seems to follow the design concept Apple has tried to bring to most of its devices and accessories: simplicity. It may also suggest a natural progression with the company’s 2014 acquisition of headphones maker Beats, as it pushes to enhance its earbuds offerings.

“If anything, this is almost like Apple taking a cue from what other vendors have done before it, which has been Apple’s mode of operation in the past: see who does it well, and then try to do it better than others,” said Ramon Llamas, research manager of wearables and mobile phones for IDC, in an email. “We saw this with smartphones and now we are seeing it with watches. If this product reaches market, Apple will be doing the same to the Bluetooth headset industry.”

In the patent application, Apple noted that its earbuds would account for noise and wind level detected by internal earbud microphones. Furthermore, the earbuds would combine that information with accelerometer output, battery level and earbud position data, according to the application.

“Generally, the invention relates to improving the voice sound quality in a wireless headset with untethered earbuds of electronic devices by determining which of the earbuds should transmit the acoustic signal and the inertial sensor output to the mobile device,” Apple writes in its patent application. “Using the acoustic signal and the inertial sensor output received from one of the earbuds, user’s voice activity may be detected to perform noise reduction and generate a pitch estimate to improve the speech quality of the final output signal.”

According to the application, a common complaint with hands-free devices is that the speech captured by the microphone port or the headset includes environmental noise, such as secondary speakers in the background or other background noises. This environmental noise often makes the user’s speech unintelligible and therefore, degrades the quality of voice communication — a problem Apple aims to solve.