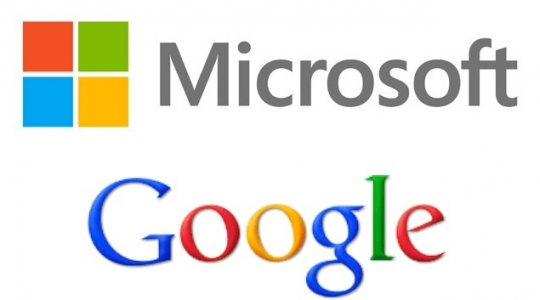 Microsoft Corp. won an appeals court ruling that may lower the rates many electronics makers pay to license technology considered standard in smartphones and computers.

An appeals court in San Francisco Thursday upheld a $14.5 million jury verdict against Google Inc. as punishment for unfairly demanding what Microsoft said amounted to billions of dollars for use of patents covering Wi-Fi and video downloads.

The decision gives new ammunition to companies like Apple Inc., Intel Corp. and Hewlett-Packard Co. which have waged a worldwide campaign to lower the amount of money they pay for essential technologies that let mobile phones download video, access Wi-Fi or accept calls no matter the manufacturer.

“This ruling is a win for consumers, competition, and innovation,” said Charles Duan, a lawyer with consumer group Public Knowledge, which backed Microsoft. “It keeps prices reasonable for old products and allows new products to come to the marketplaces.”

The court upheld a jury decision that Google’s Motorola breached its obligation to license the patents on fair and reasonable terms. The obligation came because they are part of industry standards that Motorola helped develop.

The technology industry, which is split over patent policies, has been watching this case closely for guidance on how to value standardized technology. Regulators and courts on three continents have been wrangling with the issue of whether there are different rules for such patents compared with those related to inventions that are unique to a specific product.

The developers of fundamental technology in the wireless industry, including Qualcomm Inc., Ericsson AB and Nokia Oyj, have argued they need compensation for the billions they poured into research that consumers now take for granted.

Companies often get together to develop standardized technology so products can work together. Since they have the advantage of ensuring their inventions become part of the standard, they agree to license any relevant patents on fair reasonable and non-discriminatory terms, known as FRAND.

Google got the case as part of its 2012 purchase of Motorola Mobility. It’s since sold the handset business but retained most of the patents. Caroline Matthews, a spokeswoman for Google, said the company had no comment on the court decision.

The case dates back to 2010. Microsoft argued that Motorola Inc., then a stand-alone company, violated its commitment by demanding a 2.25 percent cut of sales of the XBox video-game system and Windows products for using its Wi-Fi and video-compression patents.

Microsoft claimed the request was exorbitant and would amount to $4 billion a year. Microsoft spokesman David Cuddy declined to comment on the appeals court ruling.

Motorola, which made the demand after Microsoft sought royalties on its handsets, said the 2.25 percent was its usual opening gambit in licensing talks. It said Microsoft just didn’t want to negotiate.

When Microsoft refused to pay, Motorola asked courts to shut down sales. Microsoft was forced to move its distribution center out of Germany before District Judge James Robart in Seattle said Motorola couldn’t get any sales bans while the royalty fight was pending.

In 2013, after Google’s acquisition of Motorola, Robart determined the patents were worth a small fraction of what the company had sought. He looked at the value of the patents added to the standard and compared the rate to that collected by patent pools, where a number of companies combine their patents and charge a set fee.

The jury, using Robart’s valuation, found that Motorola had breached its contractual obligations to license its patents on reasonable and non-discriminatory terms.

After Robart’s ruling, other judges in the U.S. began copying his analysis for their own cases.

The appeals court on Thursday upheld Robart’s analysis of how to calculate the correct royalty rate, and the jury’s use of that information. It also said Microsoft was entitled to compensation for having to move its German facility to the Netherlands and the legal costs to ensure it didn’t have to stop selling any of its products.

“The jury’s verdict was supported by substantial evidence, and its damages award was proper,” the three-judge appeals court panel ruled.