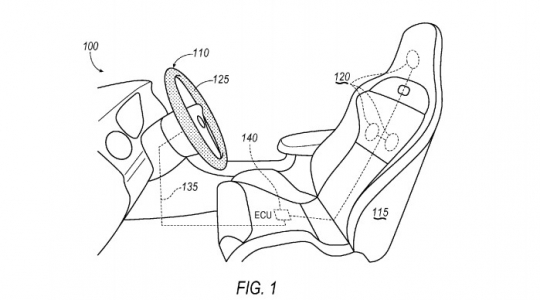 No one likes passwords. We keep jumbles of them in our head — usually two or three standards, plus a string of variations to suit the whims of allegedly “safer” websites with 12-character-minimums. We can get chastised, locked out, or all-together blocked while trying to remember the particular email/password combo we used for a long-ago signup.

There are apps to manage those words and phrases, but many of us are looking past the password itself to some other means of user identification. Apple added a fingerprint system to recent iterations of the iPhone, and one new company wants to tie logins to your heartbeat. According to Patently Apple, Ford has filed a patent application to add similar features to future automobiles.

Application #20140285216 bears the vague and unwieldy title, “SYSTEM FOR ENHANCING SIGNAL QUALITY FROM CAPACITIVE BIOMETRIC SENSOR IN A VEHICLE FOR CONTINUOUS BIOMETRIC MONITORING”. Further down the page, Ford’s description of the system is equally vague — though in fairness, that’s pretty common in patent applications, because it allows patent holders to sue for infringement more easily.

That said, the gist is pretty simple: Ford envisions a vehicle equipped with sensors embedded in the steering wheel and the car seat. Those sensors would measure heart rate, temperature, and other biometric data.

Why? There are at least three uses for this kind of technology:

Security: Sensors in the steering wheel could read a driver’s fingerprints to ensure that the person in the driver’s seat is actually the vehicle’s owner or other authorized user. That identification could be confirmed by additional sensors in both the steering wheel and seat, which would measure the driver’s pulse. (Cardiac rhythms, like fingerprints and irises, are unique.) There would obviously have to be workarounds for when someone’s ill or otherwise unable to drive, but the basic idea is a good one.

Comfort: Sensors could gauge the body temperature of the driver and adjust climate control accordingly. There’d be no need to fiddle with the a/c, because the car would respond on its own. Presumably, sensors could be added to passenger seats to create a range of climate zones within the vehicle.

Health & safety: Ford’s sensors could determine if a driver is sleepy and drop the temperature in the cabin to wake her up. If the sensors detect an irregular heartbeat, the system could alert the driver or, in the case of a sudden medical emergency like a heart attack or seizure, they could trigger the vehicle to stop.

‘As with most technological advances, this one isn’t without its share of downsides. Since Ford’s system could be used as a potential health monitor, it raises all kinds of privacy concerns, like: what happens if my data is hacked? Can my insurance rate go up if I suffer a health emergency while driving? And so on.

That said, if General Motors’ “Switchgate” fiasco has taught us nothing else, it’s taught us that car keys are a largely antiquated technology. And although it may seem a little “Gattaca”, based on what we’ve seen elsewhere in the tech world, biometric technology is likely the future of user identification. It’s logical to assume that the technology will soon find its way to cars.