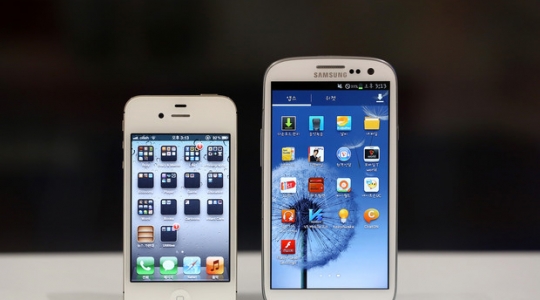 Samsung Electronics Co. (005930) began its attack on patents Apple Inc. has asserted in a $2 billion case by trying to convince jurors that the iPhone maker exaggerated claims about inventions allegedly copied by the Galaxy maker.

Samsung, trying to avoid a repeat of two years ago when jurors found infringement and awarded Apple $1.05 billion in damages, is calling on witnesses with smartphone technology expertise, including engineers from Google Inc., to argue that some of Apple’s technology is so obvious it shouldn’t have been patented.

Apple faces a bigger challenge this time because, unlike the 2012 trial that focused mostly on claims about the look and feel of its devices, the current case “requires the jury to dig into the nitty-gritty details of software that Samsung received” from Google as the developer of the Android operating system, said Brian Love, a professor at Santa Clara University law school.

“Google’s involvement in the case seriously undermines Apple’s narrative that Samsung is a blatant copyist,” Love said. “The Google brand is very strong and, more importantly, is associated with forward-looking innovation, not piracy,”

The second U.S. trial between the world’s top two smartphone makers in federal court in San Jose, California, follows legal battles on four continents to dominate a market that was valued at $338.2 billion last year, according to data compiled by Bloomberg. Samsung had 31 percent of industry revenue, compared with 15 percent for Apple, whose share of the market has shrunk as the touch-screen interface has become commonplace and Samsung, LG Electronics Inc. and Lenovo Group Ltd. have introduced lower-cost alternatives.

Yesterday’s testimony builds on earlier efforts by the Galaxy maker to differentiate its products from Apple, and is intended to undercut the iPhone maker’s bid to claim the high ground on designing novel functions that make phones easier to use.

Kevin Jeffay, a professor of computer science at the University of North Carolina at Chapel Hill, challenged Apple’s assertion that one of its patents exclusively protects a smartphone function allowing users to make a call by clicking on a phone number within a Web page or e-mail instead of having to dial it separately.

While the patent describes a process for detecting or searching “structures” such as phone numbers, it doesn’t pertain to a function as much as “overall architecture,” he testified.

In the Android-powered Samsung phones at issue in the lawsuit, “there is no server” that the search function is relying on, Jeffay said. Any detecting and linking is “all done by the applications themselves.”

In cross-examination, Rachel Krevans, a lawyer for Cupertino, California-based Apple, started her questioning of Jeffay, as she has with other Samsung witnesses, by trying to steer jurors away from the notion that the real target of the lawsuit is Mountain View, California-based Google, as Samsung’s lawyers have claimed.

“Samsung is the defendant in this case, correct?” Krevans asked. “Not Google?”

As soon as Jeffay agreed, Krevans got him to acknowledge that he hasn’t investigated “what changes Samsung has made” to the Android code running on the phones accused of patent infringement.

Apple, which finished presenting its evidence last week, has argued that Suwon, South Korea-based Samsung, not Google, made the decision to use the infringing features to sell more than 37 million smartphones and tablets that violate its patents.

Apple claims that 10 Samsung products, including the Galaxy S3, infringe five patents covering a range of user-interface designs for the iOS software that powers iPhones and iPads, including features like the slide-to-unlock function and automatic spelling corrections. Apple seeks about $2.2 billion in damages.

Samsung used another computer science professor yesterday to contest Apple’s claim that Galaxy devices have copied a patent for a feature that allows users to use a single “universal” search to find information from different sources.

Samsung at one point was forced by a court order to remove the search function from its Galaxy Nexus model. An appeals court later ruled in Samsung’s favor and the function was restored.

Massachusetts Institute of Technology professor Martin Rinard showed a video to jurors to demonstrate that a version of Samsung’s search function, using technology designed by Google, “has all the benefits” of the iPhone feature, “but does not violate” Apple’s patent.’’

Rinard also said that the U.S. Patent and Trademark Office made an error in issuing the Apple patent because it didn’t have all the information required to make an informed decision. That is grounds for finding the patent invalid, he said.

Krevans, the Apple lawyer, asked Rinard about the 900 hours he has served as an expert for Samsung, at his rate of $850 per hour.

“I’m not great with zeros but that means you’ve been paid about $750,000” by Samsung? the attorney asked.

“As a ballpark I think that’s accurate — a lot of work,” Rinard said.

Krevans asked Rinard, who acknowledged that he’s a patent holder, if the government properly issued his patent.

“I certainly hope so,” Rinard said.

The professor was then asked if his patent is valid “because the government decided to issue the patent.”